The idea of the Blog is to support a small Charity and this season we have chosen "Nottingham Stroke Club". A small charity that relies on fundraising with no paid workers. It offers support to Stroke victims and hold day meetings every Thursday to include a Quiz, lunch, chair exercises and also day trips and holidays. We are to sponsor 25p for each goal we see scored during the 2019-2020 season at matches we attend. Any clubs that would like to pledge or friends/fans please contact me 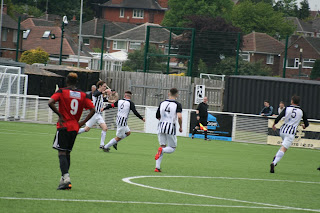 Stapleford Town won the Premier Division title and for a long time in the season it was a fight between them and Southwell City at the top, but Southwell dropped a few points and ended up in third place, but in the 2 league meetings, it was the Minister Boys that had the edge, winning 1-0 at home and a 1-1 draw in the other meeting, so a close Final was expected.

The game began in front of a large crowd despite the FA Cup Final being held at the same time and the game was quite even with both sides going close until in the 25th minute, JONATHAN NUSSEY released a volley n to the corner of the net to give City the lead.

Straight from kick off, Town pushed forward and were caught out and a long ball found JONATHAN NUSSEY who punished them to make it 2-0.

The Second Half began in  dramatic style when on 47 minutes, a City player was upended and James Hunter saw red as his Town side were reduced to ten players. Up stepped JONATHAN NUSSEY to place the spot kick in to the net to complete his hat trick.

In the 54th minute, things got worse for Stapleford Town when they were reduced to nine players when Luke Guadagni bought down a opposition player on the edge of his penalty area.

In the 68th minute, Stapleford had a corner, but a long ball out found City sub GEORGE CAUDWELL who drove forward and placed the ball past the outcoming Turner in the Town goal to make it 4-0.

It soon became 5-0 as on the next attack, GEORGE CAUDWELL chipped the ball in to the net. By now a few of the Town;s heads had gone down, but they still soildered on and got a slight reward when ADAM HASSELL neatly chipped the keeper with 13 minutes to go.

In injury time, CALUM LAW finished off the job to make it 6-1.

My self and my wife Hazel would like to thank everyone for donating at this matches Charity Raffle that raised £149 in aid of Nottingham Stroke Support Group.

149 photos can be seen on this LINK
at May 18, 2019
Email ThisBlogThis!Share to TwitterShare to FacebookShare to Pinterest 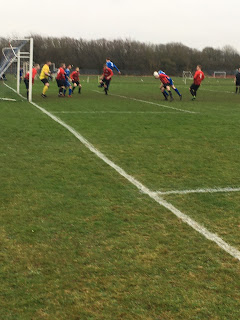